A few months ago when I spoke with Jen, an entrepreneur and Chicken Consultant in Chicago (yes, even the city of Chicago allows urban hens for eggs) about her business, she told me about a chicken purse that she carried which actually was what got her started....she had gone to visit her accountant, he asked about her chicken purse, and whaalaa, she helped him with getting his own hens going in his backyard. He joked that she should become a professional "consultant" to those who wanted to raise chickens, and she did! It was as a joke at first, but soon she realized that it was serious and people all over Chicago were interested.

The "Chicken Purse" was one of the many things Jen and I had in common....I felt an instant camaraderie with her; we both had chicken purses! 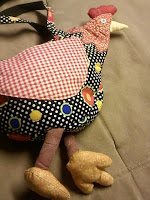 My own purse was made for me by my mother-in-law, Yone, who is a magnificent quilt and seamstress. It's one of a kind, quite adorable, and it's feet even sway to and fro as I carry it on my arm when I walk! If you see someone with it in town, it's me! Say hello! 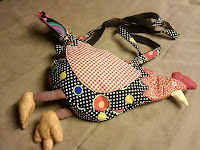 Posted by chickensforeggs@gmail.com at Saturday, November 27, 2010

chickensforeggs@gmail.com
As a poultry enthusiast for over twenty years, I've raised a variety of chickens for fresh eggs, for show, and for the dinner table. I specialize in helping new and future chicken owners, and can help you with coop options, chick rearing, health issues, feeding, and more. I am also available for "chicken sitting" while you are on vacation! For information and rates please send an email request (this helps me avoid strange calls in the middle of the night) with your telephone number and email address. I will contact you shortly!