Got Smoke? Helping Your Chickens During The Wildfires

Just a little over a week ago, a wildfire of devastating proportions engulfed the Town of Paradise in a matter of minutes. Families, seniors, adults, children, and the entire community had to evacuate quickly. Lives were lost, homes were lost, and the tragedy of it all is still sinking in for many.

Thousands of people are lending a hand, donating food and household goods - it's absolutely amazing how the community is coming together to provide aid to those in need. Even the pets and livestock are getting assistance... did you see the recent story about the Oroville CHP Officer who happened upon a flock of backyard chickens in Paradise? He was patrolling for looters and heard something that sounded like...chickens! They were unharmed by the fire but had no food or water. He went right into action and got them both to them, and they even left some eggs for him the next day. 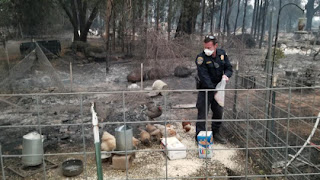 
With so much ash, debris, and smoke - this leaves us to wonder how safe our chickens are in the environment, along with the food they produce. Earlier this year, UC Davis research team Dr. Birgit Puschner and Dr. Maurice Pitesky began a study on this exact topic, collecting and testing eggs from chickens where fires had taken place. Although the findings are not yet available, their research will become especially important after the recent #Campfire. Sacramento CBS Local aired a story about the research back in April.

According to an article published by UCCE (after the Tubs fire in Sonoma), "In addition to all the destruction and inhalation of smoke associated with the recent fires in Northern California, one of the unfortunate legacies remaining are chemical contamination of land, soil and water.  The wildfire debris can include household hazardous waste (e.g. batteries and other electronic waste, paints, flammable liquids), building material (e.g. stucco, sheetrock, joint compound, asbestos siding and pipe insulation), pesticides, and fire suppression chemicals that may have been used.  For example, ash debris from the California wildfires from 2007 was found to contain heavy metals that could cause long term health effects with exposure at high levels" (1).

Because chickens forage by scratching, pecking, and exploring their environments, it may be wise to limit their exposure to any areas decimated by wildfire. Backyard chicken keepers may also want to exercise "an abundance of caution" when considering whether or not to consume the eggs of chickens that might have ingested any form of contaminants. At this time, scientists are uncertain of the risks associated with fire-related contaminants and withdrawal periods.

So how about the smoke?
While the recent levels of smoke (both in the ravaged fire areas and in the valley) have been highly unhealthy for all of us, they don't make little N95 masks for chickens (at least not yet). Chickens can experience respiratory distress and succumb to smoke inhalation, but unfortunately, there is not much that can be done other than removing them from the environment:

All victims of the fire are in our thoughts and prayers! No matter where you live - have an evacuation plan and be prepared in case an emergency happens.

Donation centers are still in desperate need of livestock feed and supplies! Contact the University of California Livestock and Natural Resources Advisor or the Butte County Ag Department.


(1) Puschner, B., Pitesky, M. (2017, October 27). UCCE Recommendation for Backyard Poultry Owners in Areas Affected by the Fires. Retrieved from URL.

Posted by chickensforeggs@gmail.com at Saturday, November 17, 2018

chickensforeggs@gmail.com
As a poultry enthusiast for over twenty years, I've raised a variety of chickens for fresh eggs, for show, and for the dinner table. I specialize in helping new and future chicken owners, and can help you with coop options, chick rearing, health issues, feeding, and more. I am also available for "chicken sitting" while you are on vacation! For information and rates please send an email request (this helps me avoid strange calls in the middle of the night) with your telephone number and email address. I will contact you shortly!